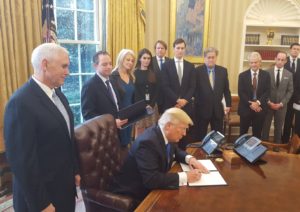 In his first 21 days as President, Donald Trump has already made history by having the most executive orders and memorandums issued by a U.S President (previously held by President Obama). True to his word, President Trump stirred the pot in Washington leaving many employers in a frenzy to keep up with the latest updates to the rule of law. We’ve narrowed the list down to the top four executive orders employers should bookmark.

Immediately following his inauguration, President Trump took the first step to repeal the Patient Protection and Affordable Care Act a.k.a “Obamacare”. The order instructed directing members to take steps that will facilitate the repeal and placement of the Affordable Care Act, and “minimize the unwarranted economic and regulatory burdens of the Act, and prepare to afford the States more flexibility and control to create a more free and open healthcare market”. In terms of changes in policy, the order does little to change the Affordable Care Act due to the law’s deep framework and will require more involvement from either the Legislative or Judicial Branches of government for any substantial changes going forward.

2. Protecting the Nation from Foreign Terrorist Entry into the United States – January 27th

– (UPDATE) On February 3rd, a federal judge in Seattle issued a temporary restraining order to the President’s executive action until further hearings can be held to determine the order’s constitutional merit. An attempt by the Trump administration to reinstate the ban through a federal appeals court was denied early on Sunday, setting up further rebuttals and a possible constitutional showdown very early into Trump’s presidency.

Probably the most controversial and publicized executive order given by the new administration prohibited travel from seven Muslim-majority countries for 90 days. Employers across the nation scrambled to adjust as many green card holders, foreign nationals with employment-based visas, and foreign temporary guest workers were left stranded. The Trump administration has since worked to clarify several aspects of the order, including allowing green card holders from the banned countries to enter the U.S without having to acquire waivers.

Also known as the “one in, two out” executive order, the act requires agencies to remove two existing regulations for every one new regulation implemented. Trump has had a track record of opposition towards over-regulation and stated during the signing that the law would be, “cutting regulations massively for small business and for large business”. The order would also strengthen Trump’s hold on the regulatory process by allocating each agency an annual quota of regulations through the federal budgeting process.

There was growing speculation as to how the President would handle the Department of Labor (DOL) Fiduciary Rule. Trump ended the uncertainity when he issued an executive memorandum that delayed the implementation of the Department of Labor (DOL) Fiduciary Rule for an indefinite time period while the DOL conducts a review and determines whether and how it should go into effect. The rule which was set to be rolled out from April 10, 2017 – January 1, 2018, elevated all financial professionals who work with retirement plans or provide retirement planning advice to the level of a fiduciary, therefore legally and ethically obligating financial advisors to meet the standards of that status. Some possible outcomes of the review include: